One of our primary goals at Southern Accents is to preserve the stories of the architectural elements we obtain. Having a family owned and operated business for 54 years means that we have a treasure trove of personal stories to tell as well. Dr. Gudger started this business in 1969 when his love for collecting architectural antiques quickly filled up his garage and he decided to take his hobby to the next level, turning it into a small business. 54 years later his son, Garlan, Jr. now manages the business and is passing his love for preserving the past to his two sons, Garlan III (Tripp) and Pierce.

Garlan, Jr. reflects, “Growing up as a child I remember watching my father work hard at something he was passionate about. He would often ask me on Saturday morning if I wanted to go to work with him. There weren’t many Saturdays that I did not accompany him. I would sweep floors and put coal in the furnace on chilly mornings to heat the store. We were the only business on our block in the down town area at that time. As a young boy, I would spend hours searching the store for treasure. My dad would take old door knobs that he collected and dump them in buckets. I would go through every bucket and examine each individual knob. I would pick out the ones that were ornate or had unusual faces and unique designs which is how I started collecting door knobs. My father encouraged my imagination by allowing me the freedom to create things from salvage pieces I would find in the store. Each day in the store was an adventure! Working alongside my dad, I not only developed my own passion for historical artifacts, but I also gained a tremendous amount of knowledge from listening to his stories. By the time I was 13, elderly friends and customers would come by the store and were always surprised that this kid knew more about the ‘old stuff’ than they did! Now 37 years old, I don’t remember a day I haven’t helped with this business in some way. As a grown man, I am still hunting for treasure. Instead of digging through buckets of knobs, I now realize that the true treasure lies in preserving the stories and history of the artifacts that we collect. My father’s passion for historical preservation of significant architectural pieces is something that I now want to pass on to my two boys.” 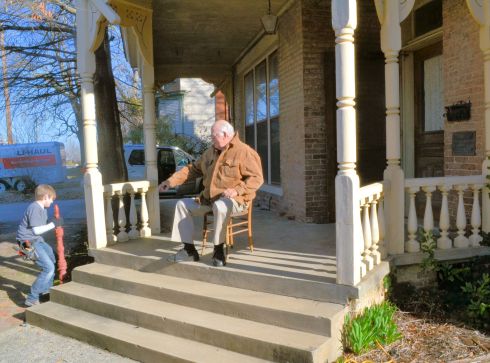 Dr. Gudger mentoring Tripp on his first salvage mission. This post which Tripp removed will remain a family keepsake.

If you have been following our posts these past two week’s you already know that we have been salvaging two houses in Arkansas, one of which is on the national register. Even though salvaging these houses is a double edged sword for our family, we are thankful that the owners gave us the opportunity for such a significant find. Three generations of the Gudger family traveled together for Phase I of the salvage operation; Dr. Gudger, Garlan Jr. and for the first time Garlan III (Tripp). Tripp’s first salvage job saw his Grandfather watching over and mentoring him… all the while encouraging that same passion for architectural salvage that he instilled in his own son Garlan Jr. years ago. Tripp has started asking questions and showing an interest in the business that Garlan Jr. is hoping to foster in both his sons. There just might be a few floor sweeping days for the young Gudger boys in the very near future!

This entry was posted on Thursday, March 7th, 2013 at 2:56 pm and tagged with architectural salvage, cullman, cullman alabama, Dr. Garlan Gudger, Garlan Gudger, Little Rock Arkansas, salvage, southern accents, southern accents architectural antiques and posted in Antique Salvage, Local Interests. You can follow any responses to this entry through the RSS 2.0 feed.
« #wesaveoldstuff
The Life Of A Mantel – Behind The Paint »

One response to “3 Generations – Tripp On His First Salvage Trip!”