Southern Accents is located in historic downtown Cullman. Given the fact that our business, and our passion, revolves around salvaging elements of historical significance, it only makes sense that our showroom and warehouse would be located in an old building rich with history. An unexpected element of residing in an old dwelling however is a few unexplained occurrences that have left us questioning whether we are the buildings only inhabitants! 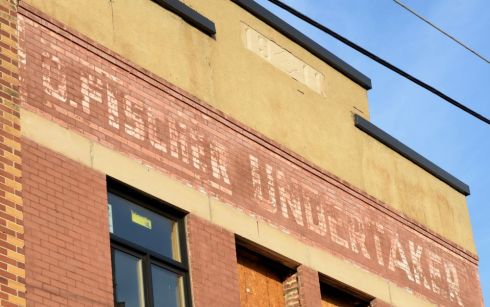 While our showroom is located on 2nd Avenue, travel around the corner to the other side of the block and you will arrive at the front entrance of our warehouse and wood shop. Look up and the building itself clearly speaks of its former resident on the facade of the brick. Still visible, the sign reads O. Fischer Undertaker. From what we have been told, a room that now serves as our wood shop was once an embalming room. In the back corner is an elevator shaft used to transport the deceased from the embalming room to a viewing room upstairs. The upstairs area has been transformed over the past few years into a beautiful loft apartment, the residence of Southern Accents owners Garlan and Heather Gudger. Although the elevator is no longer in use, the door, which remains locked for safety reasons, would open upstairs into what is now the master bedroom.

Over the years, Roger, our local artisan, has many times heard an unexplained woman’s voice in the wood shop as well as encountered an odd occurrence or two! Roger explains the voice as a “whispery sound carried in the wind.” Although he says that he can definitely distinguish the voice as that of a woman, he’s never been able to understand what she is saying. He has heard the voice on numerous occasions, enough to give “her” a name, Matilda. Talk to Roger and he will tell you about a time when he had a cup of water sitting on his work table. Suddenly the cup started swaying back and forth without the assistance of the wind or any other activity that would have generated the movement. He grabbed the cup to prevent it from toppling over and spilling. Roger talks of Matilda with a bit of a nervous grin on his face. Oddly enough, he has not heard her voice since a destructive tornado ripped through the downtown area in April of 2011. Even so, don’t ask Roger to come in to the wood shop and work on a project after dark!

When asked if there had ever been any paranormal activity in the upstairs area, Heather has her own thrilling story. When the Gudgers first moved into the loft, there were a number of items left behind that they decided to keep which included an old hospital bed, embalming bottles and a cake stand. The cake stand was cleaned and displayed on the kitchen counter. Heather tells of three separate occasions when she used the cake stand to hold her rings while she washed the dishes. On each of these occasions, her wedding ring, and only her wedding ring, disappeared. Each time she frantically combed the apartment looking for the missing jewelry only to find days later that the ring had been returned to the cake stand. Needless to say, she no longer places her rings on the cake stand! 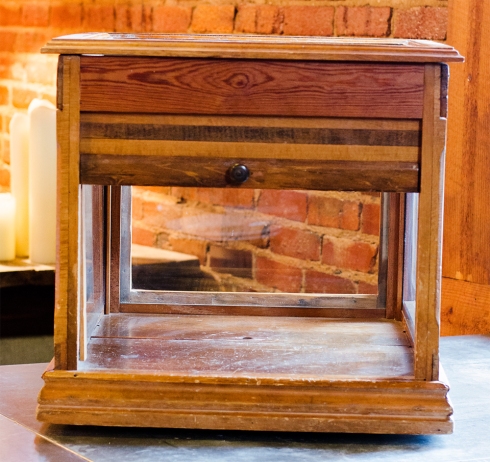 This wood cake stand found in the loft was cleaned up and now sits on the kitchen counter.

Whether ghosts or spirits unable or unwilling to exit this earth really exist is questionable. All we know is that there have been numerous unexplained occurrences in a building that once was home to O. Fischer, Undertaker. The questions we ponder are whether our “Matilda” was responsible for Heather’s missing wedding ring and where is she now? Did the tornado scare Matilda off? It sure scared the heck out of us! 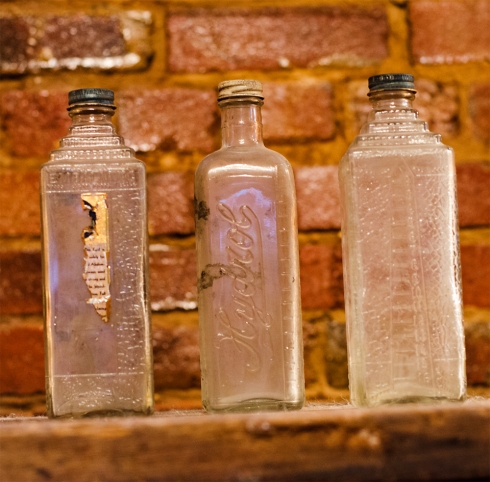 Embalming bottles left from the days of the Undertaker!

Stop by Southern Accents and tour our showroom and warehouse. There’s lots of interesting things to see and we always have a few stories to share!

This entry was posted on Monday, November 4th, 2013 at 12:02 pm and tagged with architectural salvage, architecture, cullman, cullman alabama, Garlan Gudger, salvage, southern accents, southern accents architectural antiques and posted in Antique Salvage, Local Interests. You can follow any responses to this entry through the RSS 2.0 feed.
« Are You Socially Plugged In?
The Lovely Miss Heather »

One response to “A Haunting Tale”