Trying to adequately describe Southern Makers to those who have never been is a difficult task. It’s neither a craft fair nor an art show, but rather an experience. Our experience this past weekend was nothing short of spectacular! The weather was perfect, the crowds exhilarating, the level of talent impressive, and the camaraderie with fellow makers treasured. This years event was the best yet!

When asked to describe this past weekend in three words, some of the responses from the SA Team were: creativity, passion, inspiring, connections, friends, work, achievement, humbling, thankful, and blessed.Our team returned late Monday after an all night session of dis-mantling and loading the many elements that we contributed to this years event which included the entrance, stage, conversation tent and quite a few vendor booths, including our own. The opportunity to spend time at an event of this magnitude with like minded artists who share our vision and passion makes all of our hard work worth the effort. The icing on the cake was the many conversations that took place with attendees. The excitement that exuded from the crowd was invigorating. And even better is the fact that through our efforts, we were able to help raise funds for a very worthwhile cause, E.A.T. South.

We hope that everyone is following Southern Accents social media pages as we will be sharing more pictures and stories in the days and weeks to come of this unforgettable event. We will also be updating everyone on future events as planning begins for 2016. In the mean time, we would like to thank everyone who worked tireless hours to make Southern Makers 2015 the huge success that it was. We would also like to thank all of the extremely talented Makers for their participation as well everyone who supported our efforts by attending the event. Job well done!

The entrance was a collaboration between Southern Accents and Walker Timber Frames.

The large scale replica of the state of Alabama was constructed of salvaged wood and trim and includes a representation of each county. Local artist Leldon Maxcy cut each piece with his scroll saw!

Billy Reid’s booth was one of several built by the Southern Accents Team. 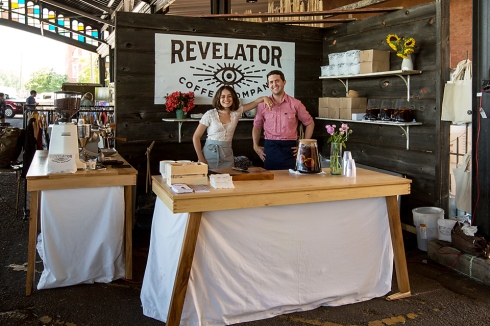 SA used salvaged wood to construct the backdrop for the Revelator Coffee booth. The tables were created by our friends at Wood Studio!

The Pine Hill Haints closed out the show Sunday night.

This entry was posted on Tuesday, May 12th, 2015 at 9:00 am and tagged with #saaa1969, Billy Reid, montgomery alabama, pine hill haints, revelator coffee, southern accents, southern accents architectural antiques, Southern Makers, union station train shed and posted in Antique Salvage. You can follow any responses to this entry through the RSS 2.0 feed.
« Rub A Dub Tub
From Warehouse to Wow! »